With dementia, spatial perception gets screwed up, patients often can’t distinguish between things that are of a similar color. This is why you’ll see a lot of toilet seats that are colorful in dementia care facilities. Residents often can’t see the white toilet against the white wall. Similarly, the ability to do something like puzzles gets harder, coloring in coloring books gets interesting because they can’t distinguish one shape from the next and where things start and stop. It’s like doing that stuff with a 3 year old. When Dad was still sort of at the early to mid-level of his dementia progression, we occupied him with puzzles and coloring books, but it got harder for him to do them. For Christmas 2 years ago, I wanted to get him some stuff to entertain him, and so I ducked into Dollar General and looked at the kids stuff – bubbles, puzzles, coloring books, activity books. And then I sort of stood there stunned and realized that we had really gotten past that point. He couldn’t even do some those things. And I started to cry. Even the simplest kids’ puzzles were beyond him. This strong, intelligent, thoughtful man had been reduced to the mental state of a 2 year old in so many ways. These two paintings, from my Fractured Memories series, are about how we’re losing him, one puzzle piece at a time. 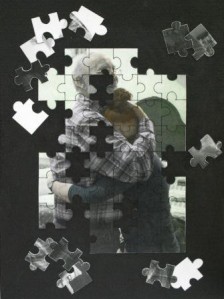 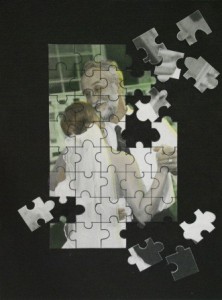 As this disease has progressed, the story of our lives together and our relationship has been lost bit by bit. The pieces that fit together for our particular puzzle have gone missing in his mind, and his own identity has gone along with it. The way he gave his own brand of Daddy hugs and kisses, dancing at my wedding, those things are disappearing, puzzle piece by puzzle piece. I keep trying to gather them up and reassemble them, but at some point, I have to let go and know that the puzzles will never be whole and complete again, but that they’re not any less precious to me. I can hold on to what remains and remember for the both of us, and know that even these tougher memories that are being made now – the ones where he remembers my name, or laughs when I zerbert him – are their own unique puzzles and should also be cherished. Or maybe they’re all just additional pieces to a greater puzzle that encompasses the entirety of his life. And I’m lucky enough that I get to be the one that makes sure those pieces stay safe and are not forgotten.