Today, my grandmother, Muddy, would have been somewhere around 104 years old. I know Muddy’s a strange thing to call your grandmother. I think it had something to do with my dad not being able to say “Mummy” correctly when he was little and her not wanting to be called anything close to Grandma. Also, it’s only slightly weirder than what my cousins called her husband, my grandfather: Gumpy. So, let’s talk about my grandparents. I don’t care if you don’t want to. I want to. And I’m controlling the keyboard, so I win. My grandparents were, quite frankly, amazeballs.

On my mom’s side, my grandfather, Arthur Batty, came over from England when he was a teenager. In England, his family had owned a Vaudeville theatre. For rillz. How cool is that? Here’s my proof: http://www.arthurlloyd.co.uk/StocktonGrandLedger/Ledger.htm When I was little, he’d tell me fantastic stories in his wonderful Stockton-on-tees accent, that you never knew whether or not they were real, because he was a prankster. He’d sometimes mix up words, like the time he said that a family brought their Frisbee home from the hospital, meaning they’d brought their preemie home. So when he was telling a story, you had to figure out if a) he was telling the truth, b) he was lying, or c) telling the truth but mixing up his words. For example, if he said that he used to keep an elephant ‘ook in the trunk of his car, you had to weigh the possibilities once you figured out that ‘ook, was of course, hook. Given his family history in England, it was entirely plausible that he owned such a device, but would he have had one 20 years later in his car trunk? And what on earth was it there for? To this day, I don’t know if his elephant ‘ook stories were true. When you pulled on his mustache, he’d squeak for you. Gramps was a draftsman, and made led soldiers and bagpipers that he painted with tiny intricate plaids. I still have a couple of his brushes that I use now and again, and I like to think that some of my artistic ability comes from him.

My grandmother on that side, Bernice Batty, was one disciplined lady. At age 40, she opened her own hair salon, and basically supported her family since my grandfather’s employment was sporadic. She came from just about nothing, and she ran a successful business in a time when not a lot of women did that, and she saved and saved and left both of her daughters and all 4 grandkids money when she passed. She also left us hair brushes from her salon days. Gram loved to tell me about how the neighborhood women would always refer to her “magic brush” because everyone else used a comb for back-combing and giving hair height, but she did it with a brush. They’d say, “Oh dear, we need to take you to see Mrs. Batty’s magic brush.” She was an entrepreneur, a fact that I didn’t fully appreciate until I opened my own business, and now I have SO much respect for what she accomplished. While she was generally a no-nonsense person, if you got her on a dance floor, watch out. The woman could shake it. And when you gave her a hug, her hearing aid would squeal and she’d say, “Oh for cryin’ out loud,” and turn it down. She was basically completely deaf at the end and the hearing aids did virtually nothing to help, but still those damn things squealed away. Oh, and she had to live her whole life with the first name Bernice and the middle name Matilda. She bore it bravely.

Please ignore the creepy person in the doorway.

Gram and Gramps were tiny little people, and I felt like a giant next to them. There are very few situations that I’ve found myself in in life where I’ve been the tall one, so that was awesome.

On my dad’s side, my grandfather, Irvine Page, was, let’s just say, accomplished. Here’s what I mean: http://en.wikipedia.org/wiki/Irvine_Page He played a major role in hypertension research. He co-discovered serotonin, y’all. For rillz again. And he was on the cover of Time Magazine. But more importantly, he ate blue cheese and peanut butter on crackers for lunch every day, played tennis until he was 89, and he’d chase me around the house trying to tickle me. He was an insomniac, and I used to stay in his study when I’d visit. In the middle of the night I’d roll over and he’d look up from his desk bathed in warm light from the desk lamp and smile at me, and I’d know that all was right with the world. My grandfather was busy fixing things.

My grandmother, Beatrice Page, danced with Ruth St. Denis. And published a novel, The Bracelet. And was a published poet. When I was in high school, my English teacher made us choose a poet and poem about which to write an essay, and when I told him that I wanted to write about my grandmother, he sort of rolled his eyes and demanded to see some of her poetry first. Then he shut up and read, and when he was done said, “Yes, yes you can definitely write about her. This is really good.” She was my idol. We wrote letters back and forth, and I have copies of typewritten letters she traded with her editor. She always took me seriously when I’d share my angsty high school poetry with her. She was elegant and classy and sharp. She got birds to eat out of her hand at her window every morning like Sleeping Freakin’ Beauty or Cinderella. When my dad was a kid and my uncle a rebellious teen, my uncle was bragging to my dad and his friends while working outside. He was saying, “Frank and me fucked this girl, and Frank and me fucked that girl,” etc. After about 5 minutes, my grandmother leaned out the window and said, “Dear, I believe you mean Frank and I.” BOOM! 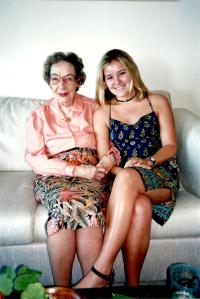