One of the tough things about this whole dementia thing is seeing it degrade my parents’ relationship. Their relationship has transitioned from spouses to parent and child. As the dementia kills off more of my dad’s brain, his understanding of their relationship has been killed off with it. My mom is now, honestly, his mom, too. This is particularly difficult to witness, because, truly, I idolized their relationship. They were best friends. My dad absolutely doted on my mom. The only times they really fought were when they were building or renovating houses because my dad would measure once and cut it wrong, and my mom would measure it 15 times and never get to cutting. But they were really good partners in life. Of course they had their problems, because, let’s face it, marriage ain’t easy, nor is parenting. But they sure made it look a lot easier than what I saw going on with my friends’ parents. They balanced each other well, laughed at each other’s jokes, shared in domestic housework. They were both feminists and believed in equality between the sexes. Again, they were best friends.

Watching that slip away has been hard. A while after my dad was diagnosed, his wedding ring, which my mom had made, broke. Then my mom lost hers, found it, and lost it again. They each ended up having to get replacement rings until Dad lost his and was past the point of noticing, and we decided not to replace it. The timing of it became so symbolic for me in the ending of their marriage. For their 40th anniversary, Mom decided she really didn’t want to celebrate, as the marriage was, effectively over, despite my dad still being physically present. That was heartbreaking but understandable.

This painting, from the Fractured Memories series, is based on a photo of them, as dirty hippies, early in their marriage. I love the photo, but I’ve used the dripped paint to symbolize the shroud that’s fallen between them and over their marriage. 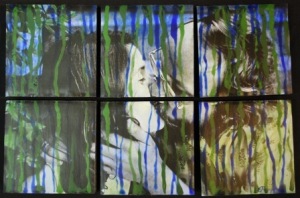