I went exploring in search of train yards today to take some photos to work from for paintings, and managed to find the Norfolk Southern rail yard and the CSX rail yard. I was kind of nervous because, post 9/11, they’re a lot stricter about photographing trains. For awhile, they were stopping rail fans from photographing by the tracks. I was hoping no one would stop me, and even brought a small partially completed painting with me to show them what I was working on, and dressed in my least threatening attire and was ready to bat my eyelashes if necessary. But no one was around the first yard at all.

At the CSX yard, I found an elderly gentleman working on restoring a 1950’s baggage car from the Canadian Rail line, which was parked next to an old Pullman sleeper car from 1911. He gave me a tour of the baggage car, but the owner of the Pullman was out of town this weekend. The gentleman working on the baggage car says the other guy is usually around on Sundays and would love to give me a tour if I swing by again another weekend. The man working on the baggage car was thrilled to have a young woman interested, so I let him talk and pointed to things and asked questions and let him ramble for a good 45 minutes while I clicked away with my camera. The guy was adorable. I will definitely go back in a couple weeks for a tour of the Pullman car that’s being renovated.

Will send off my photos for printing and then am hoping to get started on some train paintings. I’ll talk more about trains and my dad’s connection to them in another post. But for now, I’ll leave you with this: At the Norfolk Southern yard, I found this baffling sticker posted all over what appeared to be a couple abandoned and dilapidated cars: 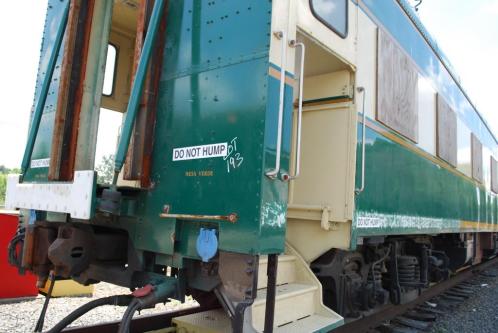 Is train humping a thing?!!

2 thoughts on “Do Not Hump the Train”