Lest you, dear readers, think that everything related to my dad is wailing and pulling at hair and gnashing of teeth, let me reassure you that we do, in fact, find things to laugh about along the way. For example, the other day, he was in a group activity looking to all the world as though he was asleep. The activities director was playing word games with the residents, asking for words that start with each letter. When she got to “j,” my dad – eyes still closed – piped up with “justification!” The man can normally barely utter more than “yup,” but he came up with a 5 syllable word that no one around him was likely to have been using beforehand for him to parrot. When we came in a couple days later to visit, the nurse on duty said, “They’re in the music room doing meditation. Nick’s meditating on justification.” Yes.

There are days during which Dad sits with his eyes closed a lot, though he’s definitely awake. When I came in on Sunday to visit, he was sitting there with his finger wiggling around in his ear. It went on for about 10 minutes. My theory is that he was trying to scratch his itchy brain. Hey, it happens.

He also has a tendency to have very itchy skin, so it’s a battle to keep him moisturized and his nails clipped so he doesn’t compulsively scratch himself raw. He also likes to chew his fingernails down to the skin, then keep chewing, and then chew some more, and a little more after that. He’s a big fan of meals that includes fingernail with a side of skin. But who can blame him? Skin is delicious, apparently. Nails, too. Anyway, we’ve started giving him a teething ring and a couple other baby toys to occupy his hands and mouth and hopefully reduce the likelihood of him gnawing his way to the bone in his finger. He’ll sit there, eyes closed, playing with the toy for hours, thusly:

Yesterday evening, my mom texted me this pick with the caption, “Dad is armed and dangerous!” 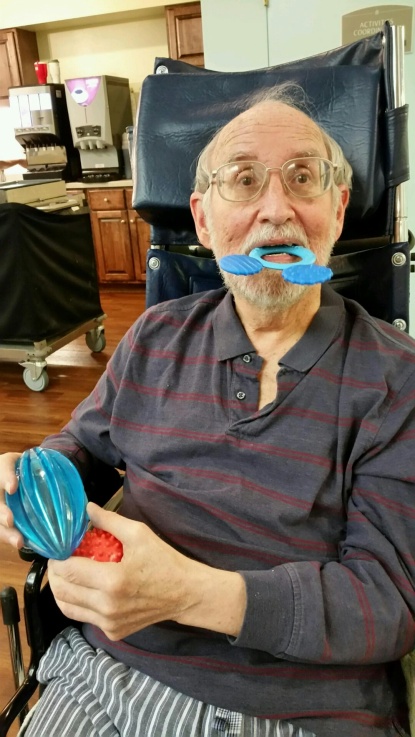 Yes. Yes he is. Cower in fear before him.