Sorry to have been missing for awhile, peeps. February 5th was the anniversary of my dad’s death, and I’ve kind of been hiding a bit. It was both harder and easier to deal with than I thought it’d be. It doesn’t feel like a year. A year. It still feels pretty damn fresh. To mark the anniversary, I went up to VA and met my mom out at the property we used to own. We’d okayed it with the current owner, who’s a really nice guy. We took some of my dad’s ashes down to the railroad tracks and scattered some there.

Then we headed into the flatwoods that have a lot of meaning to me, and were pleased to discover that the current owner also thinks it’s a special place. He left the jars there, undisturbed, set up some chairs facing the creek and added a little fire pit. Mom and I scattered more ashes into the creek and hid a couple pennies. 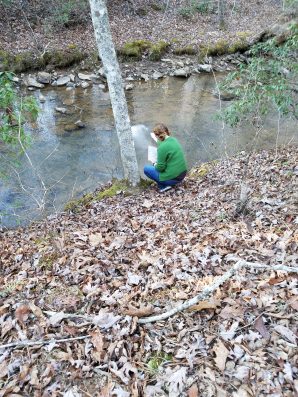 The next day, my mom and S and I went out to the cemetery to inter the rest of the cremains. They installed a nice bench under a huge old tree, and we put the box of ashes in and placed a penny with the word “thanks” written on it. When they put the top of the bench back on, we said a few words of thanks and placed a couple more pennies, then, since it was an absolutely gorgeous day, we wandered the cemetery and visited the graves of some friends and family that also reside there. 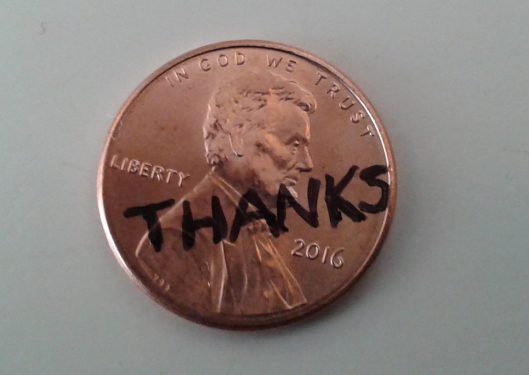 Was it hard? Yes. I miss my dad’s hugs so much – even the ones he gave towards the end of his life when he was a little stinky. There’s a finality to interring those ashes – the nail in the coffin, as it were. But there was also something healing in finally closing that chapter. There is nothing left to do now. There’s nothing hanging over our heads that needs to be done to take care of him. That’s a weird feeling, after so many years of making him our lives. There’s also some comfort in having somewhere to go if I desperately need to visit, though I doubt I’ll do that much. It’s time to move on.

So now it’s time to focus on the book. More on that soon. For now, though, thank you to everyone who helped us get through the last year since his death. It’s appreciated more than you know.