It’s been sloooooooooooooow at the tattoo studio the last couple weeks. But I did get to do a couple fun ones. My one regret from this last week was not getting a photo of the guy that got “It’sMonkeyboyTM(c)” tattooed on his arm. I love that he was claiming both trademark and copyright protection on his tattoo, because It’sMonkeyboy is super likely to catch on (watch, now that I’ve been all snarkypants, it’s actually going to go viral and I’ll have to eat my words…although I just looked him up on Twitter and @ItsMonkeyboy is a white guy, and the customer was black, so apparently it’s already being used by someone else…).

And now, for the last 2 weeks in tattoos:

I posted a watercolor painting of this image online and asked if anyone wanted it as a tattoo, and guess what? Several someones did, but the first to ask was the one who got it! 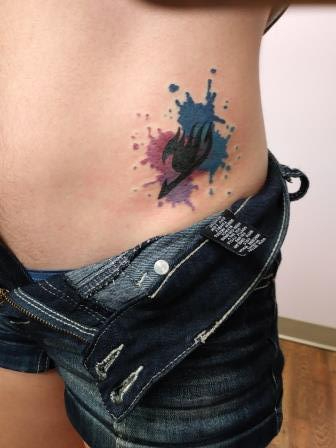 We had a number of first tattoos this week, including this one, which, apparently, is a symbol for friendship and family. 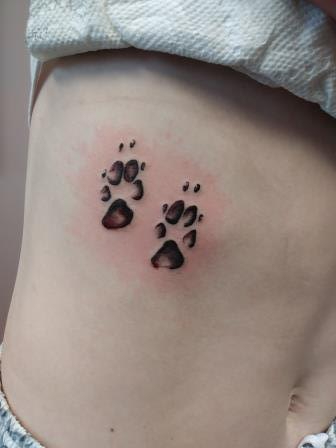 Another first tattoo, this time a memorial for her pup based on his actual paw prints. 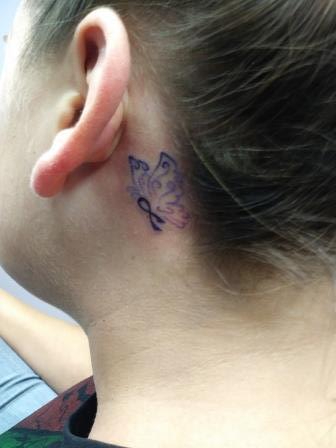 For a customer who was newly diagnosed with lupus.

This is the second request I’ve had for mountains over a wave in the last week. Love how this one turned out in particular.

My first oni tattoo. He plans to eventually turn it into a whole Japanese-inspired sleeve. 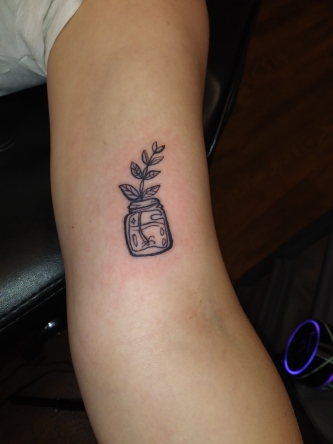 This customer designed the tattoo herself, and really wanted to be sure we had some thick and some thin lines. I think it’s an adorable first tattoo.

And my favorite for the week: the customer came in for a touch up, and brought her 12 year old sister along. The little sister was joking that she wanted to design a tattoo for her, and the customer – gulp – said yes. This is the drawing she came up with. The T-Rex’s name is Bill and he likes apples. That kid has the best big sister ever.