Just when I thought the universe couldn’t bitchslap me any harder, I see this: 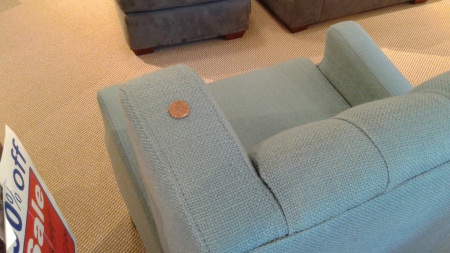 Now for most of you, this would mean nothing, but to me, it’s super meaningful. My dad and I used to get rid of the pennies in his pocket by leaving them around town as good luck for whomever found them. We’d hide them in the most random of places – inside books at the bookstore, inside planters, on railings, resting on the slats of plantation blinds…really anywhere you wouldn’t expect to find a penny. The tradition was, when you set it down, you had to say, with as much enthusiasm as humanly possible, “This is going to make someone verrrrrrrry happy!” Even if you were putting out 10 pennies, you had to say it each and every time.

S and I were shopping for some furniture for the new house and saw this penny sitting on top of the chair, and I just lost it. I started crying right there in the furniture store. Then we went to get ice cream, and someone was wearing a t-shirt from Bodo’s, our favorite bagel shop up in Charlottesville, VA, which is also the last restaurant we were still able to take Dad to after we put him in the dementia care facility. And finally, on the way to another store after getting ice cream, we passed Nick’s Trains store.

So, there I am, a hot, fragile mess, trying to pull it together before going into the next store, and I stopped and thought about it. And what I decided was that, with all the horribleness that this week has contained, maybe the universe was actually trying to remind me of how lucky I am. I have these silly memories of putting out pennies with my dad, and chowing down on the best bagels in the country, and train watching and flattening pennies on the train tracks – all with my dad. And now I’m teary, but for good reasons.

Thanks for the bitchslap, powers that be. I needed that.