This is the next installment of my grandmother’s unpublished manuscript. Beatrice Allen Page’s Landscape With Figures:

“I’ve had occasional glimpses of the Rosenblums sitting on their porch or out in their yard, but apparently they don’t care for swimming and beach-sitting and prefer to stay quietly by themselves. So we’d never met. As I was walking past their house late this morning, however, Mrs. R was just coming out. Even now, a trace of real beauty lurks behind the overlay of heavy make-up and dyed black hair, and there is a faint suggestion of a kind of queenliness in her carriage in spite of the lumpy figure stretch the too-tight dress.

Impulsively I stopped, introduced myself, and told her how much I’ve enjoyed her husband’s cello playing.

She gave me a searching, suspicious, even slightly hostile look which took me aback. Then abruptly she changed, having apparently decided I meant what I said and was not just gushing. Her face took on a glow of warm responsiveness and in a rather deep and slightly raspy voice that was not unattractive, she insisted upon my coming in to meet her husband, promptly abandoning whatever plans she may have had in mind when she came out.

I spent a delightful hour with them, in the course of which I gathered certain facts. He is a cardiologist and what he called a ‘prevented’ cellist, meaning I suppose that he never considered himself good enough to become a professional musician.

‘I’m like Chekhov,’ he explained happily. ‘I have both a wife and a mistress. Medicine is my wife and music is my mistress.’ He talks in a slightly  hesitant way with an accent, and the enlarged eyes behind the thick glasses look at you with gentleness and humor.

‘It is a good in-stru-ment,’ he said, patting the cello lovingly. ‘Good enough for me. It sounds. But sometimes I dare allow myself to imagine it is a Stradivarius. And I, I am Piatigorsky, or sometimes Casals.’

His wife laughed appreciatively although she has undoubtedly heard his little jokes dozens of times. She was once a professional pianist. There were autographed photographs – lares and penates that accompany them everywhere, I suspect – of Toscanini, Horowitz and other musical greats, ranged about on tables, but I could not get close enough to any of them to read the inscription and find out what her name had been. I had a feeling she did not want to reveal it, that she preferred to close off the past from the present. Arthritis in her hands put a stop to her career, which perhaps accounts for the slightly bitter cast of her mouth.

‘But she plays accom-pan-i-ments for me sometimes,’ Dr. R said, bestowing an affectionate look on her.

Their muual pride and joy is their son who is a violinist and currently hoping to land a job with one of the major symphony orchestras. They clearly have great expectations for him.

‘He has a good tone,’ said Dr. R. ‘Full, bi-i-g’ He drew the word out so it sounded almost like ‘beeg’ and opened his arms out in a wide, circular movement. ‘Everything is bi-i-g, full, round. Rococo.’ I doubt if that was the word he meant; I think it just sounded as if it should be. Then as if he were anxious not to brag too brazenly, he added, ‘But the lit-tle things, I tell him the get ground under.’ He twisted his heel into the rug to demonstrate. Nevertheless, when he raised his head, his homely face was alight with the pride he could not conceal.

‘Sometimes he and my husband play duets together,’ Mrs. R said, and added simply, ‘It is beautiful to hear.”

In St. Louis Dr. R plays in an amateur chamber music group. His medical practice keeps him so busy, however, that he has little time to practice the cello. ‘But,’ he says, ‘I play ev-er-y day. No matter how I feel. Even if only for three minutes. One must nev-er miss a sing-le day.’

To see that kind of loving enthusiasm and discipline, particularly without hope of recognition for one’s talent, always makes me feel good. I don’t see it very often. It has made my day.”

Is it weird that I really love the very early stage of a painting? I usually start by sketching the subject on either in pencil or in umber. Once I’m happy with the composition, I’ll paint in the background if it’s going to be a relatively simply one. I like starting with a simple background because it eases you into the painting slowly. It allows you to add color without detail and gives you a better sense of what the colors in the subject will look like against the backdrop. Once it’s on there, the background has to dry for a couple days. Strangely, I find myself coming back into the studio periodically to look at the painting in this stage. There’s something really satisfying about it because there’s nothing to critique or be frustrated with, and I love the contrast of the usually bright colors I choose for simple backgrounds next to the flat brown prepared board. The totally unfinished next to the slightly finished just tickles my sight buds (they’re like taste buds, but in your eyes).

Anyway, here are several that are drying right now after that first layer of background color: 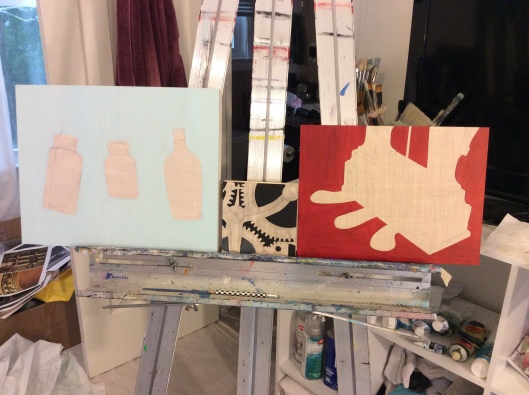