This is the story of Dizzy, our pitten. What is a “pitten,” you ask? It’s a cross between a puppy and a kitten. He looks like a cat, but we’re pretty convinced there’s more to the story based on his behavior.

We had 2 adult cats before, but our eldest, Ella, passed away about 2 years ago. We decided to bury her out at the property, which sounds like no big deal, but we had had a lot of rain that week. So, the hole kept filling up with water, which we had to submerge her in. Only, she didn’t want to be submerged. She kept floating back up. So we had to bury her mobster style by weighting her down with bricks. Yeah, that was fun. I kind of wish we had it on film, though, because we must have looked hardcore covered in mud and fur. 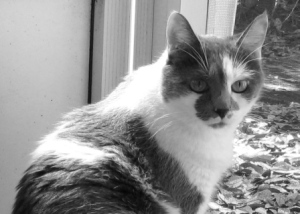 After Ella died, our other kitty, Satch, got all sad and pathetic and would cry all night outside of the bedroom door, so after a long search, we got him a kitten, Dizzy (we’ve named all of our cats after jazz musicians. We’ve had Ella Fitzgerald, Satchmo, Frankie  – for Sinatra because he had blue eyes – and now Dizzy Gillespie). I had originally planned on getting another adult cat, but had been looking for about 8 months and hadn’t fallen in love with one yet. When I was in VA visiting my parents, my mom and I had to kill a little time and decided to stop by the local SPCA to see their kitties. We walked in and saw this little kitten who looked like a mini-me of Satch. 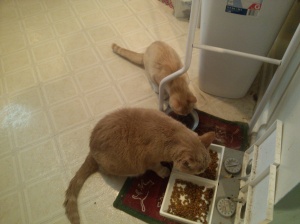 Now I’ve owned a lot of cats over the years, and I’ve never had as great and snuggly a cat as Satch, so a mini version of him was too hard to resist. Then he reached his little paw through the cage and looked pleadingly at us like Puss n’ Boots in Shrek, and we lost the battle. So much for getting another adult.

Imagine this face with a paw stretched through the cage bars at us, and you can understand why we melted.

Dizzy was either born with only 1 testicle, or has a 2nd one floating around in his little tummy, so we seriously considered naming him Testicles (pronounced Testiclees – like a very wise, uniballed Greek philosopher). He also has the cutest little kink at the end of this long fluffy tail. We got a defective cat. While we decided to name him Dizzy, his real name seems to be “Dizzy-No!” He’s rotten to his very core (as evidenced by the fact that when he poops, it smells like Satan himself is coming out of this cat’s butt), and he torments Satch like it’s his job. There are many times when I have seriously considered turning him into a shishkacat. This has resulted in Satch being even more sad and pathetic. And now, instead of Satch crying outside our bedroom door all night, Dizzy does it. Oops. He chews everything in the house like a damn dog. I thought maybe it was because he was losing his baby teeth or something, but he’s about a year and a half old now and he’s still doing it, so that’s not the reason. To date, he has destroyed/eaten 5 cat toys and chewed through 6 speaker wires, 1 dvd cord, 3 cell phone charger cords, 3 ribbons, 1 vacuum cord, 11 shoelaces, the plastic wrapping for at least 10 bundles of firewood, and chewed a bald spot into my hair. We’ve had to wrap all vital cords in terry cloth and duct tape.

This is what it now looks like behind our TV

His favorite game other than tormenting poor, sweet, Satch, is to wear belts. Here’s what I mean:

He does this for hours each day. He dives in and wriggles the loop onto him, wears it around like a belt, wriggles out, then repeats the process over and over and over. And Satch just looks at him, like, “what the hell is wrong with you?” I’m telling you, defective cat. Pitten.